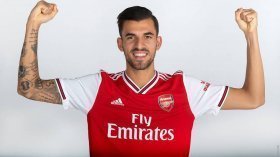 Arsenal representatives have been in contact with Real Madrid in order to discuss the possibility of extending midfielder Dani Ceballos' stay in North London. The Gunners have been impressed with the recent form of Ceballos and see him as an important member of the squad for the 2020/21 campaign.

Arsenal are not interested in securing the permanent signing of Dani Ceballos from Real Madrid this summer, a report from The Sun claims.

Arsenal have decided against making the transfer of Dani Ceballos a permanent one, informing the Spaniard that he can return to his parent club of Real Madrid once this season's campaign ends. Ceballos demonstrated flashes of brilliance early on in his Gunners career, but has recently struggled to force his way in to the club's first team.

Arsenal have received a boost in signing Daniel Ceballos on a permanent basis from Real Madrid after the midfielder insisted that he has not held any talks with Zinedine Zidane.

Real Madrid to use Dani Ceballos to sign Aubameyang?

Real Madrid are reportedly prepared to offer Dani Ceballos as a makeweight as they seek to land the services of Arsenal captain Pierre-Emerick Aubameyang this summer.

Real Madrid to use Dani Ceballos to sign Arsenal youngster?

Real Madrid could reportedly offer Dani Ceballos in a player-plus-cash deal to sign Gabriel Martinelli from Arsenal this summer.

Arsenal manager Mikel Arteta has said that the club have yet to discuss the possibility of signing Daniel Ceballos on a permanent basis from Real Madrid this summer.

Arsenal are scheduled to host Everton in the Premier League this evening.

Dani Ceballos is reportedly determined to part ways with Arsenal during the current transfer window after failing to receive assurances of regular playing time under Mikel Arteta.

Real Madrid have reportedly blocked a loan move for midfielder Dani Ceballos amidst the transfer interest from Valencia, according to Marca.

Arsenal could reportedly miss out on the signing of Pablo Mari following a disagreement with Flamengo over the transfer package.

Arsenal manager Mikel Arteta has indicated that Dani Ceballos will have to fight for his spot in the playing XI amid the speculation that Real Madrid loanee could head through the exit door.

Spanish midfielder Dani Ceballos has stated his ambition to part ways with Arsenal this month following the lack of playing time under manager Mikel Arteta.

According to Spanish outlet AS, Real Madrid have stepped up their interest in Napoli midfielder Fabian Ruiz as the Spanish midfielder is yet to renew his contract with the Serie A club.

Arsenal have finally confirmed that Rob Holding has been struggling with a knee problem which has kept him out of action over the past few weeks.

Arsenal's on loan midfielder Dani Ceballos has informed his agent that he would like to have his long-term future secured by January at the latest. Ceballos is currently with the Gunners on a 12 month loan deal, but could be set to return to Real Madrid at the conclusion of his temporary spell.

Arsenal have received a potential boost in securing the permanent signature of Dani Ceballos, given the Spaniard has no intention of returning to Real Madrid at the end of the season.