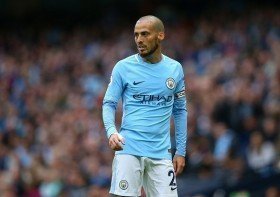 David Silva 'set to sign for Lazio on a three-year deal on Monday' after saying goodbye to Manchester City following decade of service at the Etihad
after beating Real Madrid on Friday. The game was Silva's last at the Etihad with the rest of the tournament taking place in ...
08/08 11:53

Manchester United and Manchester City are reportedly in the running to sign Philippe Coutinho from Barcelona during this summer's transfer window.

Manchester City have reportedly made contact with Ligue 1 club Rennes over the signing of Eduardo Camavinga, according to Manchester Evening News.

The 20-year-old turns out to be a prime target for La Liga giants Real Madrid and  Barcelona, while Bayern Munich is also reportedly keeping close tabs on him.

Manchester United have reportedly received a double injury boost ahead of their Premier League encounter against Chelsea on Saturday.

Manchester City have reportedly entered the pursuit of midfielder Ivan Rakitic, who has found gametime hard to come by at Barcelona this term.

Manchester City and Arsenal could reportedly go head-to-head to secure the services of Isco from Real Madrid during the winter transfer window.

Manchester City manager Pep Guardiola has earmarked Arsenal midfielder Dani Ceballos as a potential target to strengthen the squad at the end of the season.

Manchester City have suffered a major injury blow ahead of the Liverpool game with midfielder Ilkay Gundogan likely to miss the Premier League clash.

Pep Guardiola orchestrated one of the most imperious campaigns that the Premier League has ever seen last season, but the Spanish manager is not the one to rest on his laurels.

David Silva has indicated that he does not plan to see out his playing career with Manchester City.