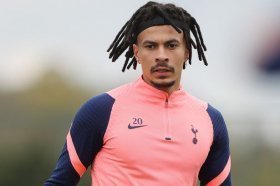 Misfit midfielder Dele Alli is on the verge of leaving Everton with Turkish side Besiktas his likely next destination. The 26-year-old, who scored 51 Premier League goals in 181 games for Tottenham between 2015 and 2022, arrived at Everton last year on a free transfer.

West Ham United are expected to offer strong competition to Newcastle United in the race to sign Dele Alli next month.

Tottenham Hotspur are ready to part ways with Dele Alli when the transfer window reopens next month.

Tottenham Hotspur ready to listen to January offers for playmaker

Tottenham Hotspur are prepared to part ways with Dele Alli when the transfer window reopens at the turn of the year.

Tottenham Hotspur are prepared to listen to offers for Dele Alli despite the midfielder starting the final five games of the campaign.

Tottenham Hotspur to miss out on Christian Eriksen?

Christian Eriksen may not make his return to Tottenham Hotspur this month as Inter Milan are demanding a loan fee.

Dele Alli appears to have moved a step closer to a six month loan deal to join Ligue 1 side Paris St Germain. The England international is desperate to play on a regular basis, and so far at Tottenham this season has been primarily resigned to substitute appearances.