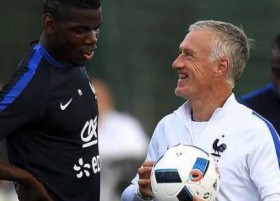 Paris’s love-hate relationship with poster boy Mbappe
... have made a habit of carving gems from concrete. William Saliba, the Arsenal defender also in Didier Deschamps’ squad, was reared here.
08/12 22:58

Chelsea have already agreed the transfer of RB Leipzig star Christopher Nkunku, according to L'Equipe.

The most exciting fixtures from the international break

The international break often divides opinion. With some supporters seeing their country play as a privilege, especially for the smaller nations, and others viewing it as often meaningless games that are a burden as they disrupt the domestic season.

France manager Didier Deschamps has said that Olivier Giroud must play more regularly at Chelsea to remain the first-choice striker for Les Bleus.

France international Olivier Giroud could pursue a fresh challenge away from Chelsea when the transfer window reopens in January.

Chelsea striker Olivier Giroud could reportedly be reunited with former manager Maurizio Sarri at Juventus during the January transfer window.

Chelsea striker close to 'striking an agreement' with Italian giants

Chelsea striker Olivier Giroud is reportedly on the cusp of striking an agreement with Inter Milan ahead of the January transfer window.

Arsenal striker Alexandre Lacazette has heaped praise on compatriot and teammate Matteo Guendouzi and believes the midfielder has the credentials to be the best in his position.

France head coach Didier Deschamps has revealed that N'Golo Kante had sustained a groin problem which contributed towards his withdrawal from the matchday squad against Iceland.