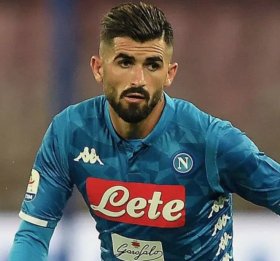 The agent of Elseid Hysaj has confirmed that Chelsea were interested in signing the Napoli defender when Maurizio Sarri was the head coach of the club.

Tottenham have made an offer of 25 million euros to sign Elseid Hysaj from Napoli. The Albanian international is considered one of the Serie A outfit's best defenders in recent seasons and a move to the Premier League could soon beckon as Mauricio Pochettino looks to bolster his squad ahead of the new campaign.

Chelsea are reportedly planning to revive their transfer interest in Napoli's Elseid Hysaj when the transfer window reopens at the turn of the year.

Chelsea manager Maurizio Sarri has reportedly urged the club's hierarchy to make an approach to sign Napoli defender Elseid Hysaj at the turn of the year.

The representative of Elseid Hysaj has suggested that the Albanian could part ways with Napoli in the near future with Chelsea among those interested in his signature.

Davide Zappacosta could reportedly be heading for a winter exit from Stamford Bridge with Napoli prepared to make an approach for his signature.

Italian manager Maurizio Sarri is reportedly keen on signing three Napoli players once he is appointed as the new head coach at Chelsea.

Manchester United are reportedly interested in lodging a summer approach to sign Albanian defender Elseid Hysaj from Serie A side Napoli.

Chelsea are reportedly looking to revamp their defence with the signings of Kalidou Koulibaly and Elseid Hysaj from Napoli at the end of the season.

Napoli's Elseid Hysaj is reportedly a top target for both Arsenal and Manchester United for the summer transfer window.

Manchester United boss Jose Mourinho is reportedly weighing up a winter move for Napoli defender Elseid Hysaj. The 22-year-old was a transfer target for Arsenal in the summer transfer window.