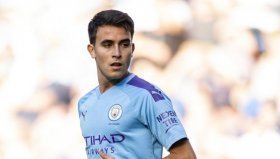 Barcelona could look into signing either Antonio Rudiger or Shkodran Mustafi in January, suppose they are unable to negotiate a deal for Eric Garcia.

Barcelona will reportedly prioritise the signing of Eric Garcia from Manchester City in January following the long-term injury suffered by Gerard Pique.

Arsenal defender Shkodran Mustafi has emerged as a potential option for Barcelona when the transfer window reopens in January.

Barcelona could make a winter move for Antonio Rudiger, should they fail in their attempt to sign Eric Garcia from Manchester City.

Manchester United and Liverpool have received a boost in signing Barcelona winger Ousmane Dembele when the international transfer window reopens in January.

Manchester United have been offered the chance to sign Ousmane Dembele on a permanent basis before the transfer deadline.

Barcelona have reportedly made a fresh approach to sign Eric Garcia from Manchester City.

Barcelona are reportedly considering a surprise attempt to sign Antonio Rudiger from Chelsea before the transfer deadline.