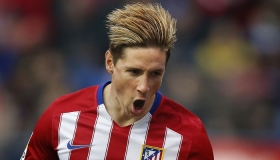 Fernando Torres, Alexis Sanchez: What are the worst January transfers in Premier League history?
to Arsenal Unai Emery brought Spanish playmaker Denis Suarez to the club on transfer deadline day in 2019, but the former Manchester City
06/01 14:55

Newcastle United manager Rafael Benitez has admitted that a reunion with Fernando Torres would be 'an attractive option', though it is unclear whether the Spaniard would fancy a Premier League return.

Liverpool attacker Mohamed Salah has stressed that he is content plying his trade with the Reds despite talk of a big-money switch to Real Madrid in the summer.

Former Liverpool and Chelsea striker Fernando Torres is reportedly eyeing a return to the Premier League for the second half of the 2017/18 season.

Everton have reportedly opted against making a fresh move for Arsenal's Olivier Giroud in January, and will instead pursue a new marksman elsewhere.

Premier League side Everton could reportedly make an attempt to sign Atletico Madrid's Kevin Gameiro during the winter transfer window.

Chelsea defender Cesar Azpilicueta has admitted that he is delighted to work alongside compatriot Alvaro Morata, who was signed from Real Madrid last week.

Southampton have joined the race to sign Atletico Madrid forward Luciano Vietto during this summer's transfer window. The Argentine spent the previous season on loan with Sevilla.

After his contract with La Liga side Atletico Madrid expired at the end of the campaign, Spanish striker Fernando Torres has entered advanced talks to sign for Mexican club Queretaro.

Atletico Madrid striker Fernando Torres has told teammate Antoine Griezmann that he does not have to leave the Spanish club to achieve success, adding that "he has the world in his hands" in Madrid.

Premier League toppers Chelsea are planning to activate the release clause of Yannick Ferreira Carrasco at the end of the season. The Atletico Madrid winger is unhappy with his reduced playing time under Diego Simeone this season.

Real Madrid could be eyeing a surprise move for Philippe Coutinho once they transfer embargo is lifted. The Brazil international has been key to Liverpool's bright start to the campaign.

Will Griezmann be The Hundred Million Pound Man

Chelsea boss Antonio Conte is willing to spend a club-record sum to sign Napoli defender Kalidou Koulibaly. The Blues have been in negotiations for the player since the start of June.

Chelsea have placed Loic Remy as makeweight in a deal which could see Everton striker Romelu Lukaku return to Stamford Bridge this summer. The Belgian has revealed his intention to win trophies at a top European club next season.