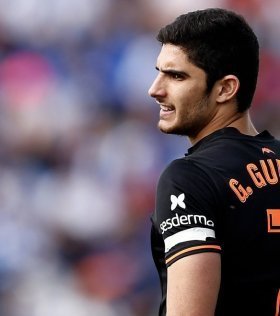 23-year-old midfielder Matheus Nunes is set for a move to the Premier League, in a transfer deal worth a reported £40 million from Sporting Lisbon. The Portuguese starlet, 23, has caught the eye in his domestic league and will become the club's record transfer fee once a move is completed.

28-year-old Belgium international forward Michy Batshuayi will finally leave Chelsea on a permanent basis this summer, after five separate loan spells away from Stamford Bridge failed to win the 6 foot 1 striker a permanent contract. Both Fenerbahce and Wolves will attempt to sign the forward for a nominal fee, believed to be in the region of £250,000.

Wolves have wrapped up the signing of Goncalo Guedes for Valencia in a deal worth around 37 million euros. The Portuguese international striker has been brought in to supplement the club's attack, as Raul Jimenez picked up an injury in pre-season.

Goncalo Guedes is set to leave Spanish side Valencia for a move to the Premier League, after an unnamed English club had a bid accepted for the Portuguese international striker. It is understood that Wolves have had an offer accepted of 30 million euros for the striker.

Liverpool and Arsenal are reportedly keeping tabs on the performances of Valencia attacker Goncalo Guedes.

Manchester United in the hunt to sign Valencia attacker?

Manchester United are reportedly weighing up a £51m move to acquire the signature of Goncalo Guedes from Valencia at the end of the campaign.

Italian champions Juventus will approach PSG for a potential deal for Argentinian winger Di Maria after the Champions League final.