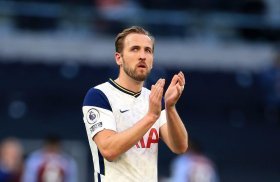 Tottenham have been linked with a surprise transfer move for Germany international and Werder Bremen striker Niclas Fullkrug in the summer, as the White Hart Lane outfit look to bolster their attacking ranks with uncertainty over the long-term future of star striker Harry Kane. Fullkrug yesterday scored two goals in the 2-1 victory over Wolfsburg in the Bundesliga.

Sevilla have made an offer to sign Bryan Gil on loan until the end of the season from Tottenham, with a view to a permanent move. It is understood that Sevilla will pay 20 million euros for a transfer for the Spain international moved to White Hart Lane in 2021. After that a loan deal to Valencia followed. Gil has finally forced his way into Antonio Conte's side, but could now be set for an exit already.

Tottenham have hijacked Everton's loan deal to sign Netherlands international Arnaut Danjuma, and agreed a deal that brings the 25-year-old to White Hart Lane until the end of the season. The Toffees had already agreed terms, completed a medical and arranged media for an announcement of Danjuma's arrival, before Spurs made their last minute move and persuaded the Villarreal forward to move to North London instead.

Tottenham Hotspur striker Harry Kane is reportedly open to making the switch to Manchester United during the summer transfer window.

Tottenham have told Brazilian forward Lucas Moura that he is surplus to requirements at White Hart Lane, and the 30-year-old Brazilian could now move to league rivals Everton. Lucas Moura has been left on the sidelines in recent months, and manager Antonio Conte will not look to renew the former PSG man's contract, that expires in June.

Tottenham Hotspur are firm favourites to sign Brighton and Hove Albion attacker Leandro Trossard this January transfer window, as Spurs look for attacking reinforcements ahead of an injury to Richarlison. With uncertainty over the long-term future of star player Harry Kane, it could be possible that Spurs are signing Trossard as a replacement.

Manchester United are ready to make an approach for Bayern Munich striker Eric Choupo-Moting whose deal expires in the summer.

Tottenham Hotspur manager Antonio Conte has been locked in talks with chairman Daniel Levy regarding additional transfer funds for the January transfer window. Conte wants at least £140 million to spend, as Spurs slip behind 13 points from bitter rivals Arsenal, with the Gunners having a game in hand.