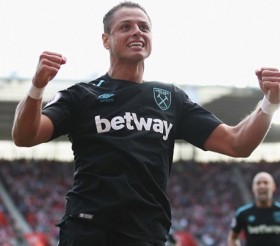 Man Utd have the new Dimitar Berbatov and Javier Hernandez after Bournemouth win
matches unbeaten across all competitions. Manchester United were too strong for Bournemouth in their Premier League05/07 10:40

Mexico international striker Javier Hernandez has explained he has taken a pay cut to join Sevilla in La Liga. West Ham decided to sell the forward after the player had been considered surplus to requirements at the London Stadium this summer.

West Ham United have reportedly decided against the sale of Javier Hernandez this month amid the speculated interest from Spanish club Valencia.

West Ham United are reportedly among the clubs monitoring the progress of Munir El Haddadi, who has struggled to make himself a regular with Barcelona.

West Ham United striker Javier Hernandez is reportedly keen on parting ways with the club when the transfer reopens in less than a month's time.

Arsenal boss Arsene Wenger has made 11 changes to his lineup for tonight's League Cup quarter-final versus West Ham United.

Arsenal will look to return to winning ways when they host Newcastle United in the Premier League this afternoon. The Gunners are winless in the last three top-flight matches, and this has dropped them one point behind the final Champions League spot.

Arsenal midfielder Jack Wilshere has stressed that he has yet to discuss a potential extension beyond the end of the season. The England international will enter the final six months of his Gunners deal next month.

West Ham United have dismissed Slaven Bilic from his managerial role following the club's dismal start to the 2017/18 season. The east London side are placed 18th in the league standings following the 4-1 defeat to Liverpool, which ultimately cost Bilic his job.

Slaven Bilic given two games to save his job

West Ham United have reportedly given Slaven Bilic another two games in order to save his managerial post. The Hammers are presently 17th in the table following a damaging 3-0 defeat at home to Brighton & Hove Albion.

Liverpool have been dealt a blow in their pursuit of Manuel Lanzini after West Ham manager Slaven Bilic confirmed that the striker will not be leaving the Hammers this season.

West Ham United are closing in on the signing of highly rated Sporting Lisbon midfielder William Carvalho for a reported fee of £30 million. Carvalho will bring European Championship winning experience to the London club thanks to his appearances for Portugal at Euro 2016.

Having watched some of their expected title rivals stumble during their opening games, Manchester United play the final game in the first round of the 2017/18 Premier League campaign when they host West Ham United on Sunday.

Argentine attacker Manuel Lanzini is reportedly on the cusp of penning a new extension with West Ham United.