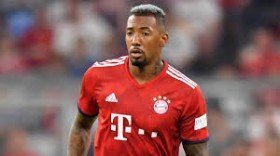 Chelsea transfer rumours: Jerome Boateng 'open' to switch, Olivier Giroud again linked with move
Chelsea returned to Premier League action on Saturday afternoon in impressive fashion, with a 2-0 win at Newcastle United. An own goal from
21/11 21:30

Manchester United are reportedly eager to negotiate a pre-contract with David Alaba when the transfer window reopens next week.

Manchester United are no longer in the running to sign defender Dayot Upamecano from RB Leipzig.

Chelsea are reportedly looking into a move for Bayern Munich defender David Alaba next month.

Liverpool and Manchester United have reportedly received a boost in signing Dayot Upamecano next summer with Bayern Munich unlikely to afford him.

Serie A giants leading the race to sign Liverpool target

Bayern Munich star Jerome Boateng has said that he has been left surprised by the recent speculation linking him with a move to the Premier League.

Arsenal and Chelsea could compete for the services of Jerome Boateng when his contract expires with Bayern Munich next summer.

Chelsea have received a boost in signing David Alaba with the Austrian said to be reluctant to sign a new contract with Bayern Munich.

Arsenal to miss out on Dayot Upamecano?

Arsenal could miss out on the services of Dayot Upamecano from RB Leipzig amid the reported interest from Spanish champions Barcelona.

Arsenal are reportedly prepared to make an attempt to sign Bayern Munich defender Jerome Boateng as they seek to cover up the injury absence of Calum Chambers.

Arsenal centre-back on his way to Turkey?

German centre-back Shkodran Mustafi is reportedly close to sealing a loan departure from Arsenal amid the interest from Turkish champions Galatasaray.

Arsenal board have concerns with Mikel Arteta's top January target

Arsenal could reportedly sanction the sale of Shkodran Mustafi this month, given the German has fallen out-of-favour this season.

Arsenal have reportedly enquired over the asking price for Bayern Munich's Jerome Boateng with Mikel Arteta aiming to strengthen the heart of the defence.