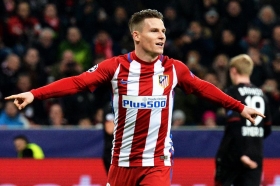 West Ham United have reportedly rebuffed an opening offer from Swansea City to pursue the services of former player Andre Ayew this month.

France international Olivier Giroud is prepared to push for a temporary deal away from Arsenal in January in order to maintain his place in Didier Deschamps' squad.

Newcastle United manager Rafael Benitez is set to demand a transfer kitty of around £20m in order to strengthen his squad further during the second half of the season.

Everton have reportedly opted against making a fresh move for Arsenal's Olivier Giroud in January, and will instead pursue a new marksman elsewhere.

Everton are reportedly weighing up a surprise deal for Andy Carroll in the January transfer window. The West Ham United striker has been identified as a £20m target for the Toffees, who are looking to fill the void left by Romelu Lukaku.

Premier League side Everton could reportedly make an attempt to sign Atletico Madrid's Kevin Gameiro during the winter transfer window.

Southampton have joined the race to sign Atletico Madrid forward Luciano Vietto during this summer's transfer window. The Argentine spent the previous season on loan with Sevilla.

FC Barcelona have completed the signing of Spanish international striker Paco Alcácer from Valencia, in a deal worth €30 million with a potential additional €2 million in conditional add-ons.

Valencia striker Paco Alcácer is on the verge of completing a €35 million move to FC Barcelona, after completing medical with the Spanish champions earlier today, according to reports.

Atletico Madrid have agreed a deal for Sevilla striker Kevin Gameiro, signing the French forward for a fee of 32 million euros. Arsenal made a last minute bid for the striker yesterday evening.

French champions Paris Saint Germain are considering a move to sign in demand AC Milan striker Carlos Bacca, according to reports in France.

Barcelona have turned their attention to Carlos Bacca with a deal for other targets looking unlikely. The Colombian wants to play Champions League football next season.

Barcelona are close to confirming the signing of French forward Kevin Gameiro from league rivals Sevilla. The 29-year-old played a key role in the club's Europa League success last term.

Barcelona are planning a move for Atletico Madrid forward Luciano Vietto. The 22-year-old had a largely disappointing season following his switch from Villareal last summer.

France international Hatem Ben Arfa has emerged as the top target for Barcelona ahead of the summer transfer window. The Nice attacker has been in splendid form in Ligue 1 and this has attracted interest from a host of European clubs.