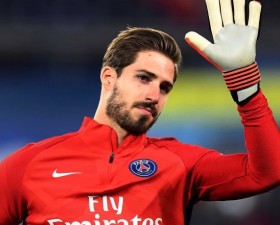 Chelsea's highly-rated young goalkeeper Marcin Bulka is reportedly on the verge of signing for Paris Saint-Germain on a Bosman agreement.

Paris St Germain are reportedly ready to make a 120 million euro transfer move for Spain international goalkeeper David De Gea this summer. The Man Utd shot-stopper, who has been a revelation at Old Trafford since his arrival from Atletico Madrid, is considered one of the world's best keepers.

Paris St Germain have sent German goalkeeper Kevin Trapp on loan to his former club Eintracht Frankfurt, after deeming the shot stopper surplus to requirements. Trapp had been PSG's first choice goalkeeper last campaign but would have been spending time on the bench this season.

AC Milan goalkeeper Gianluigi Donnarumma is reportedly prepared to snub advances from the likes of Manchester United and Real Madrid in order to pursue a move to Paris Saint-Germain in the summer.

Paris Saint-Germain have reportedly emerged as shock contenders to pursue the services of goalkeeper David de Gea from Manchester United next summer.

Paris St Germain are on the verge of agreeing a move to sign former Liverpool goalkeeper Pepe Reina from Napoli. The Spanish keeper is expected to play as second choice shot stopper at the French capital club.

Premier League holders Chelsea could lodge a transfer attempt for Alphonse Areola, should Thibaut Courtois force his way out of the club.

Top class goalkeepers can be hard to come by these days, making ones like Tottenham and France stopper Hugo Lloris very desirable to clubs aiming for success. Reports today suggest that Manchester United and Paris Saint Germain will target him in the summer transfer window.

Neuer ruled out of England clash

Germany goalkeeper Manuel Neuer has been ruled out of Wednesday's match against England and also their World Cup qualifier against Azerbaijan on Sunday. The Bayern Munich stopper has picked up a calf injury, meaning that he will therefore remain with the Bundesliga giants for the duration of the international break, according to the German Football Federation.

Fiorentina are heading the queue to sign Liverpool target Salvatore Sirigu, L'Equipe reports. The Italian goalkeeper has been tipped to leave Paris Saint-Germain after he failed to earn a regular role under Laurent Blanc this term.

Liverpool are eyeing a summer move for Paris Saint-Germain goalkeeper Salvatore Sirigu with manage Jurgen Klopp unconvinced with the abilities of current number one Simon Mignolet.

Paris Saint-Germain could make a move for Manchester United goalkeeper David de Gea at the end of the season. The Spain international signed a new four-year contract at the Mancunian giants earlier this season.

Arsenal are reportedly readying a January offer for Eintracht Frankfurt goalkeeper Kevin Trapp, according to The Star.