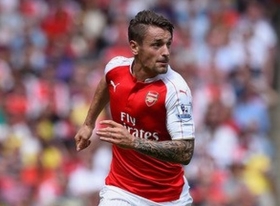 Arsenal have named Santi Cazorla in their squad for the knockout stage of the Europa League. The Spain international is currently recovering from a recurrent Achilles injury for which he underwent a 10th operation earlier this season.

Mesut Ozil to pen new Arsenal contract in the summer

Germany international Mesut Ozil has reportedly prepared to pen a fresh three-year contract with Arsenal once he returns from the summer World Cup in Russia.

Arsenal are reportedly prepared to offer Mathieu Debuchy as a makeweight to sign West Bromwich Albion defender Jonny Evans this month. The Gunners have underlined the need for a new centre-back, and there are presently leading the race to sign the ex-Manchester United graduate.

West Bromwich Albion are prepared to sell Jonny Evans to Arsenal, provided they can get their hands on Calum Chambers in a straight-exchange deal.

Mathieu Debuchy admits he is open to leaving Arsenal

Arsenal defender Mathieu Debuchy has admitted that he could pursue a new challenge when the transfer window reopens in just over a week's time.

Arsenal are at the Emirates Stadium for Tuesday's League Cup quarter-final versus West Ham United. The Gunners returned to winning ways with a 1-0 Premier League win over Newcastle United last weekend, and Arsene Wenger is certain to ring in the changes with his side hosting Liverpool in a crucial league encounter on Friday night.

Arsenal manager Arsene Wenger is likely to ring in the changes when they host BATE Borisov in the final Europa League group game. The Gunners are already through to the last-32 of the competition, and the manager will be expected to play a second-string side as he has done for most of the initial phase.