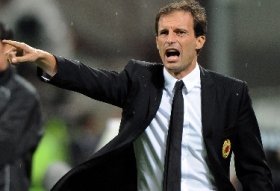 Arsenal could make a fresh attempt to sign Juventus midfielder Arthur Melo at the end of the campaign.

Newcastle United have reportedly been linked with a move for former Arsenal midfielder Aaron Ramsey.

Wales international Aaron Ramsey is prepared to stay with Juventus amid the repeated speculation linking him with Arsenal.

Max Allegri is reportedly favouring a move to the Premier League instead of Serie A, according to The Sun.

Manchester United have reportedly joined Tottenham Hotspur in the race to sign midfielder Emre Can from Juventus during the current transfer window.

Max Allegri reveals when he could return to management

Former Juventus manager Max Allegri has ruled himself out of the race for the Arsenal job after stressing that he is unlikely to return from his sabbatical until the end of the season.

Arsenal have decided to sack Unai Emery from the head coach role shortly after the club's disappointing Europa League defeat at the hands of Eintracht Frankfurt.

Arsenal have reportedly made contact with ex-Juventus boss Max Allegri regarding the prospect of replacing Unai Emery as the new head coach.

Manchester City will permit Mikel Arteta to leave for Arsenal

Manchester City will reportedly not block the departure of Mikel Arteta, should Arsenal approach the Spaniard for the head coach position.

Arsenal boss Unai Emery offered timeline to save his job

Arsenal manager Unai Emery has reportedly been offered with a month to save his job following the 1-1 draw against Wolverhampton Wanderers at the weekend.

Manchester United are reportedly in advanced negotiations with Max Allegri over taking charge as the next head coach of the club.

Massimiliano Allegri has reportedly indicated that he is open to becoming Manchester United's next head coach but he won't wait for more than a couple of weeks for the decision.

Chelsea agree to release Maurizio Sarri from his contract?

Chelsea are understood to have agreed to release Maurizio Sarri from his contract amid the Italian's interest in managing Juventus.

Paris Saint-Germain boss Thomas Tuchel has reportedly emerged as one of the front-runners to replace Maurizio Sarri as the Chelsea head coach.

Tottenham Hotspur manager Mauricio Pochettino could part ways with the club during the summer with reports emerging that he has been in regular contact with Juventus.