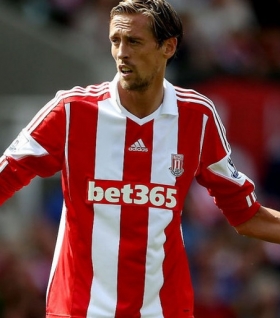 Peter Crouch on why Harry Kane will struggle to leave Tottenham and Jesse Lingard's future
will be further limited by his ambition to break Alan Shearer’s Premier League scoring record. Tottenham won’t do business with Chelsea, I
12/04 11:38

Former England international Peter Crouch has said that he would love a return to former club Queens Park Rangers.

Joe Hart's reputation in the English game has taken a dramatic fall in the last couple of years, seeing him move from England and Manchester City's first choice goalkeeper to struggling to make the West Ham starting lineup and many calling for him to be dropped from England's World Cup squad. After two seasons away from Manchester City on loan, a permanent deal for Hart could now be on the horizon.

Chelsea are reportedly weighing up a potential loan move for Leicester City striker Islam Slimani. The Algeria international has received limited gametime at the King Power Stadium with Jamie Vardy preferred ahead of him for the centre forward position.

With so many goals being scored on the last day of the Premier League season and Champions League places to play for, the clash between Southampton and Stoke City went relatively unnoticed. However, striker Peter Crouch scored to become the first player to reach an impressive milestone.

Premier League leaders Chelsea will seek to further strengthen their quest for the title when they take on Stoke City at the Bet365 Stadium on Saturday afternoon.

After the disappointment of crashing out of the Europa League in midweek, Harry Kane fired home a twenty three minute hat-trick to help Tottenham return to winning ways at White Hart Lane, with a 4-0 victory over Stoke City.

After what seems like an eternity, the transfer soap opera that is the story of West Bromwich Albion's Saido Berahino, finally looks to be coming to an end.

Stoke City have tabled a bid for Australian international striker Jamie Maclaren. The forward is amongst three players who are on the radar of Stoke manager Mark Hughes for a transfer in the January transfer window.

Stoke City - What is going wrong?

Stoke City are a side in real trouble. What started as a downslide at the back end of the 2015/16 season has continued, even spiralled, into a full blown disaster. After picking up just nine points from the last ten games of last season, they’ve secured just three in seven games at the start of this campaign. Stoke now have won just two of their last seventeen games, scoring just sixteen, but conceding an alarming thirty-eight goals in the process.

Former England international Peter Crouch has admitted that he still has more to offer to Stoke City in spite of not starting a Premier League game this season.

Peter Crouch off to West Brom?

West Brom manager Tony Pulis wants to sign Stoke City forward Peter Crouch on loan. Pulis is looking to bring in a new striker as he asks his new club to adapt to a different style of play.

QPR to move for Spurs striker?

Queen Park Rangers are believed to be considering a January move for Tottenham Hotspur striker Emmanuel Adebayor, The Sun reports.

West Ham are closing in a move for Stoke City striker Peter Crouch. The forward has been told he is surplus to requirements by manager Mark Hughes.

Peter Crouch has ruled out a move away from Stoke City, despite talk of a transfer to another team. Burnley and Aston Villa are amongst the interest teams.

Stoke City manager Mark Hughes wants to keep 33-year-old forward Peter Crouch at the club, despite talk of a move away. Crystal Palace and Leicester City are both rumoured to have shown interest.