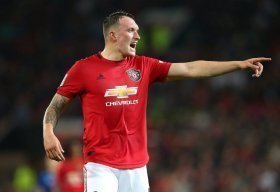 Phil Jones doesn't even get a mention on Manchester United travelling squad update
... to the defender, who was not even registered in the club’s Premier League or Europa League squads. While he was pictured in June on the ...
05/12 07:00

Manchester United will be without eight first-team players when they face Omonia in the Europa League tomorrow.

Manchester United defender Eric Bailly has made the switch to Marseille on loan with an obligation to buy next summer.

Man Utd want to sign Frenchman on a free transfer

Manchester United have been linked with a move for Dan-Axel Zagadou, who was recently released by Borussia Dortmund.

Manchester United are prepared to sell three central defenders as they look to compensate for the arrival of Lisandro Martinez.

Manchester United could be without the services of Harry Maguire and Raphael Varane for tomorrow's pre-season friendly versus Liverpool.