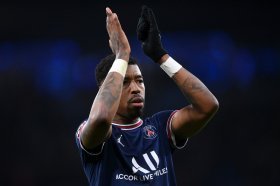 Arsenal defender William Saliba could be tempted to join Paris Saint-Germain at the end of the campaign, according to Foot Mercato.

Chelsea have been fancied to make an approach for Bayern Munich defender Benjamin Pavard, according to Christian Falk.

Paris Saint-Germain defender Presnel Kimpembe has decided to stay put at the club amid interest from Chelsea.

Chelsea will need to make a much improved offer to convince Paris Saint-Germain to sell Presnel Kimpembe this summer.

Chelsea duo Reece James and Mason Mount are set for bumper contract deals following their excellent progress over the past season.

Chelsea manager Thomas Tuchel has been in contact with Presnel Kimpembe over a summer move to Stamford Bridge.

Centre-back Nathan Ake will be staying at Man City next season, despite the interest of Premier League rivals Chelsea. The former Bournemouth and current Dutch international defender, who has three years remaining on his City contract, was the subject of a £38 million offer from the Blues.

Chelsea are prepared to sanction the permanent sale of defender Levi Colwill as part of their defensive rebuild, Fabrizio Romano reports.