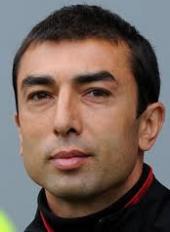 Bad luck, or over-thinking? How Pep Guardiola lost his touch in the Champions League after latest Man City setback
spot. Having gone 2-0 up against what was, on paper, a pretty weak Chelsea side managed by Roberto Di Matteo (whatever happened to...
16/08 09:49

Premier League to League One?

After a terrible time in the Premier League last season, Aston Villa were relegated to the Championship. Many fancied them to bounce straight back and win promotion, but current form threatens to see them relegated again.

Aston Villa have completed the signing of Ross McCormack from Fulham on a four year deal.

West Bromwich Albion have reportedly tabled a formal offer for Aston Villa defender Ciaran Clark. The 26-year-old has been linked with a potential return to the top flight following the Villains' relegation to the Championship.

Real Madrid lifted the Champions League crown for the second time in three years by defeating bitter rivals Atletico Madrid on penalties. Can Real Madrid be the first team to retain the coveted European title?

Roberto Di Matteo odds on for the Villa job

A new odds-on favourite for the Aston Villa hot seat has emerged in the last 24 hours in the form of former West Bromwich Albion and MK Dons manager Roberto Di Matteo.

Schalke hopeful of signing Nastasic on a permanent deal

Schalke 04 sporting director Horst Heldt has confirmed that the Bundesliga outfit are keen on securing the services on defender Matija Nastasic on a permanent contract at the end of the season.

Schalke boss Roberto Di Matteo has revealed that he is open to the prospect of signing Real Madrid midfielder Sami Khedira in the summer.

Serbia international Matija Nastasic will wrap up a transfer from Manchester City to join Roberto di Matteo's side Schalke. Matija Nastasic has found himself out in the cold in recent months and is hoping to make a transfer to the Bundesliga.

Bundesliga club Schalke have revealed their interest in signing Serbian defender Matija Nastasic from Manchester City, according to a report.

Is it the end for Andre-Villas Boas in England?

After Andre Villas-Boas' miserable second spell in English football, is there anyway back for the Portuguese coach in the Premier League?

Cardiff City have parted company with Malky Mackay. Vincent Tan has reportedly paid off the duration of his contract.

Roberto Di Matteo is apparently considered as favourite to take over the managerial reigns at West Bromwich Albion.

Sunderland could make a move for Watford manager Gianfranco Zola. The Italian is one of the top four favourites to replace Paolo Di Canio, who was yesterday controversially fired by chairman Ellis Short.

Italian manager Paolo Di Canio had been relieved of his Sunderland duties yesterday after the fiery coach reportedly lost control of the dressing room. A number of more experienced professionals visited the club's chairman with their concerns.

Should Martin Jol decide to quit Fulham at the end of the season, Fulham directors will pursue a move for former Chelsea manager Roberto di Matteo. The Italian manager is current looking for work in the Premier League.

Chelsea's 34-year-old midfielder Frank Lampard has already agreed a move to China, if reports from Chinese club Guizhou's owner are to believed. The England international has fallen out of favour at Stamford Bridge this year.