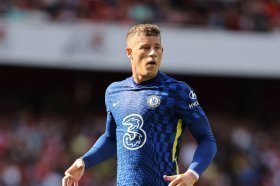 Everton: Lampard can unearth next Ross Barkley in Isaac Price
... would be no surprise that now the former Chelsea boss is settled in at Goodison Park he can start to build and adapt his very own squad, as ...
10/11 07:40

Chelsea have confirmed that they have mutually parted ways with former Everton midfielder Ross Barkley.

Chelsea are prepared to mutually terminate the contract of midfielder Ross Barkley, according to The Mirror.

Chelsea are prepared to make an opening bid to sign Manchester United target Frenkie de Jong, according to Sport.

Everton manager Frank Lampard hopes to raid his former club with a double move for Ross Barkley and Billy Gilmour. Barkley has fallen down the pecking order at Chelsea, meanwhile Scottish international Gilmour is ready to leave Stamford Bridge for regular first-team football after a loan spell with Norwich City last campaign.

Barcelona midfielder Frenkie de Jong is prepared to join Chelsea this summer despite the concrete interest from Manchester United.

German forward Timo Werner has his sights on leaving Chelsea this summer amid the lack of assurances of game time.

Everton are interested in signing three players from Chelsea this summer, according to The Athletic.