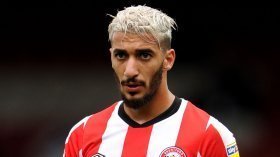 West Ham: Said Benrahma given advice on how to win Moyes over
... go this summer as they pursued other transfer targets. Journalist Paul Brown believes that Moyes and West Ham are looking to get more out ...
11/11 18:00

Brentford FC came within 90 minutes of a Premier League 2020/21 season. That was three times.

West Ham United will make an approach to sign Ivan Toney from Brentford during the summer transfer window.

Manchester United attacker Jesse Lingard is reportedly open to joining West Ham United on loan for the rest of the campaign.

West Ham United have reportedly won the race to sign Brentford winger Said Benrahma, who was previously linked with the likes of Arsenal and Chelsea.

Crystal Palace are reportedly prepared to shatter their transfer record as they seek to sign Ismaila Sarr from Watford before the domestic transfer deadline.

Arsenal could go head-to-head with Chelsea in the race to sign Said Benrahma from Brentford this summer.

Tottenham Hotspur have reportedly joined Chelsea in the race to sign Said Benrahma from Championship side Brentford.