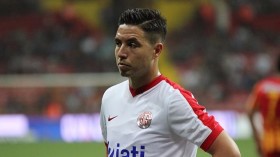 Why Jose Mourinho signed Cesc Fabregas instead of Samir Nasri to replace Frank Lampard at Chelsea
with the responsibility of replacing Frank Lampard, who had defected to Manchester City ahead of his move to New York City FC. According to
04/03 14:38

Everton have reportedly indicated that they have no plans of offering a contract to former Arsenal and Manchester City midfielder Samir Nasri.

Former Arsenal and Manchester City star Samir Nasri could be headed back to the Premier League with Everton seemingly keen on securing his services.

Former Arsenal and Manchester City midfielder Samir Nasri is apparently closing in on a move to Zenit St Petersburg on a Bosman. The Frenchman has been a free agent since his release from Turkish outfit Antalyaspor last month.

Serie A strugglers Benevento are looking at the prospect of recruiting both Samir Nasri and Alex Song this month. The Italian minnows pursued the signature of former Arsenal favourite Bacary Sagna on a free last week.

The Frenchman finally ended his six-year stint at Manchester City and will play for Antalyaspor in the Turkish Super League this season.

Manchester City boss Pep Guardiola could stick with Eliaquim Mangala for the summer amid the club's failure to recruit a new central defender.

Roma are reportedly close to finally signing Leicester City winger Riyad Mahrez after bumping up their offer to €38 million.

Having seen their bid for the Algerian winger rejected by Leicester City, Roma looks set to drop their interest in Mahrez and turn their attention to Manchester City midfielder Samir Nasri.

AC Milan will continue their summer spending spree with a move for Manchester City outcast Samir Nasri this summer.

Manchester City are set for a busy summer, as they plot big squad improvements in an attempt to compete for the Premier League trophy next season. In order to fund their new signings, the club are looking to raise over £100 million by selling players who are deemed surplus to requirements.

Pep Guardiola to clear out squad in massive summer overhaul

Pep Guardiola will be clearing out his squad this summer, and up to a dozen players might be shown the exit door, according to the Daily Mail.

On loan Sevilla midfielder Samir Nasri has branded Jamie Vardy a cheat, after a coming together of the two saw the French international dismissed for his second bookable offence during the Champions League final sixteen tie on Tuesday.

Leicester City do it again

Reigning Premier League champions Leicester City have made a name for themselves for doing the unexpected, and they did it again on Tuesday night, as they overcame a 2-1 first leg deficit to progress to the quarter finals of the Champions League, beating Sevilla 3-2 on aggregate.

Arsenal will reportedly prevent Alexis Sanchez from joining a league rival during the summer transfer window.

Spain international Hector Bellerin could be the latest to swap Arsenal for a move to Manchester City in the summer.