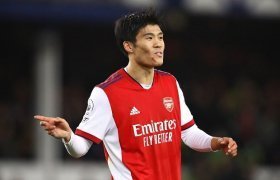 Arsenal defender Cedric Soares is set to miss the upcoming north London derby against Tottenham Hotspur with a fresh injury.

Arsenal defender Takehiro Tomiyasu has acknowledged that he is unsatisfied with his current role with the Gunners.

Arsenal have the opportunity to reclaim their top spot in the Premier League when they face Brentford this afternoon.

Arsenal right-back Cedric Soares could be out of action for around two weeks with an injury, according to football.london.

Arsenal are scheduled to host Aston Villa in tonight's Premier League encounter at the Emirates Stadium.

Arsenal have been handed a triple injury boost for the new season with Kieran Tierney, Takehiro Tomiyasu and Emile Smith Rowe back in full training.

Arsenal manager Mikel Arteta has revealed that Takehiro Tomiyasu is close to making his injury comeback.

Mikel Arteta reveals when Fabio Vieira will train with Arsenal

Arsenal manager Mikel Arteta has said that new signing Fabio Vieira should be able to start training next week.

Spanish defender Hector Bellerin could be set for a surprise stay with Arsenal, after being pictured training with the North London side. Bellerin, who spent last season on loan at Real Betis and won the Copa Del Rey with his temporary club, is open to staying with the Premier League giants despite having just one year remaining on his current deal.