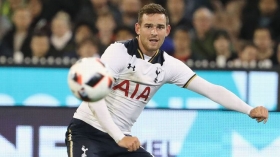 Tottenham's long-term striker transfer plans including Kyle Joseph and Dane Scarlett hopes
to Tottenham that others such as Roberto Soldado, Emmanuel Adebayor, Vincent Janssen and Fernando Llorente have all found Premier League
19/01 07:00

Tottenham Hotspur are reportedly weighing up a move for Liverpool striker Divock Origi as they seek to cover up the injury absence of Harry Kane.

Tottenham Hotspur midfielder Mousa Dembele is reportedly on the cusp of leaving the north London club for a fresh challenge in the Chinese Super League.

Belgium international Mousa Dembele is among the leading contenders who could part ways with Tottenham Hotspur at the turn of the calendar year.

Tottenham are among the clubs interested in signing Sunderland youngster Josh Maja, according to the Mirror. Maja, 19, has scored nine goals in 12 appearances in League One so far this season and has earned plenty of plaudits for his performances.

Napoli are ready to make a move for Dutch striker Vincent Janssen during the January transfer window. The Tottenham man has struggled since his arrival in the Premier League and could be allowed to leave Spurs for a cut-price 8 million euros.

Fenerbahce will reportedly retain their interest in Arsenal outcast Jack Wilshere when the transfer window reopens in four months' time.

Vincent Janssen could be included as a makeweight in a deal for Tottenham to complete a deal for Swansea City striker Fernando Llorente. The Spaniard is one of Spurs' top transfer targets before the window closes and the Swans would like to bring in Dutch forward Janssen on a temporary basis.

French club Marseille are prepared to lodge an attempt to sign Dutch striker Vincent Janssen from Tottenham Hotspur this summer.

Spurs to give Janssen second chance

Tottenham Hotspur are willing to give striker Vincent Janssen a second season with the club to prove that he is worth the £17 million that they spent on him last season.

Anyone who follows Spurs knows that they are in desperate need for a backup striker to fill Harry Kane's boots. If last season they had a player that was up to the standard required to play in the EPL, they may well have snatched the title from Chelsea. They lost too many points when the England and Golden Boot winner was out injured which ended up costing them vital points.

Tottenham Hotspur and West Ham United are showing interest in signing Bayer Leverkusen striker Javier Hernandez, who is keen to move to a new club after returning from the Confederations Cup according to reports.

Dutch forward Vincent Janssen has ruled out a potential move away from Tottenham Hotspur despite his struggles during the ongoing campaign.

Tottenham Hotspur dominated their match against Millwall in the FA Cup on Sunday, coming out 6-0 winners at White Hart Lane. Spurs are now through to the semi finals, which will be contested by four of the Premier League's current top six teams. However, star striker Harry Kane limped off with an ankle injury in the early stages of the game.

Tottenham Hotspur are said to have earmarked Burnley's Andre Gray as a potential replacement for Vincent Janssen at the end of the campaign.

Tottenham Hotspur are prepared to cash in on Moussa Sissoko after just one season at White Hart Lane. The France international has failed to live up to his Euro 2016 showing, and he is currently a regular on the bench.