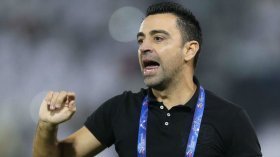 “You’re gonna play even less now”- Barcelona coach Xavi Hernandez’s message to Gerard Pique after his complaints regarding playtime
Haaland jokes he would be waiting to play against Manchester United after joining Manchester City this season Barcelona looks to have found ...
19/09 13:13

Jules Kounde reveals why he chose Chelsea over Barcelona

French defender Jules Kounde has revealed that he was convinced to join Barcelona over Chelsea after speaking with manager Xavi Hernandez.

Barcelona are keeping a close eye on Chelsea midfielder Jorginho with his contract expiring next summer.

Manchester United have their sights on landing Barcelona defender Sergino Dest before the transfer window closes.

Chelsea manager Thomas Tuchel has distanced himself from the ongoing links with Barcelona striker Pierre-Emerick Aubameyang.

Chelsea look likely to miss out on Jules Kounde with the Sevilla defender agreeing personal terms with Barcelona, as per AS.

Chelsea target Raphinha won't be travelling with Leeds United for their pre-season tour of Australia this month.

Chelsea have been handed a potential blow with Jules Kounde said to favour a move to Barcelona this summer.