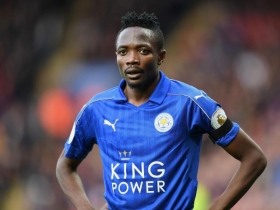 Rumoured West Ham Target Ahmed Musa Wants Premier League Move
the Midlands perhaps enough of a sample size to put off managers across the Premier League, including Moyes. West Ham would be wise to look
28/11 08:41

Ahmed Musa set to push for move to Fenerbahce

Following the arrival of Kelechi Iheanacho from Manchester City, Ahmed Musa believes his game time will be considerably reduced and as a result will push for a move to Turkish giants Fenerbahce.

Soccernet Nigeria report that Man City forward Kelechi Iheanacho could be set for a move to Leicester City this summer. The out of favour yet prolific forward has been told that he is free to leave the Etihad Stadium.

Turkish team Fenerbahce are lining up a bid for Leicester City duo Jamie Vardy and Ahmed Musa, as they look for a successor to Robin van Persie this summer.

Nigeria international Ahmed Musa have decided to cut his ties with Leicester City just a year after his arrival from CSKA Moscow for a then club-record fee of &pound16.6m.

Nigeria international Ahmed Musa will reportedly seek for fresh pastures elsewhere once his Premier League season with Leicester City comes to a close.

Why Ranieri deserved to be sacked

On May the 2nd 2016, Tottenham blew a two goal lead against Chelsea and the most surprising champions in Premier League history were crowned and all masterminded by Claudio Ranieri.

Leicester City striker Leonardo Ulloa has handed in a transfer request at the club, following a lack of first team opportunities, so far, this season.

Swansea City to snap up Leonardo Ulloa in January

Swansea City are confident that a deal can be agreed for out of favour striker Leonardo Ulloa in the January transfer window. Leicester City manager Claudio Ranieri has told Ulloa that he is free to leave the club.

Premier League holders Leicester City have reached an agreement with CSKA Moscow to sign Nigerian forward Ahmed Musa. The Foxes have been chasing the 23-year-old since the turn of the year.

Leicester to return for Ahmed Musa

Leicester City will come up with a fresh offer for CSKA Moscow forward Ahmed Musa. The Foxes failed with a &pound18.9m bid for the Nigerian international in January.

CSKA Moscow striker Ahmed Musa has revealed that he would be interested in a move to Arsenal.

Paolo Di Canio has been monitoring CSKA Moscow's versatile forward Ahmed Musa and is preparing to make a mega money offer for the 20-year-old. The player, who is comfortable playing in midfield or up front, scored 11 goals in 28 league games last season.

Arsenal scouts have been monitoring young Nigerian winger Ahmed Musa, according to transferleaks.com. The VVV Venlo man could be the subject of a 12m GBP January offer.