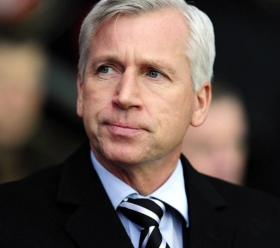 Alan Pardew has left West Bromwich Albion by mutual consent after failing to overturn the club's fortunes over the past four months.

West Brom have revealed their plans for life in the Championship should they be forced to relegation this campaign. A club spokesman has told reporters that they will not need to sell their star players to compensate for a lack of Premier League revenue.

Alan Pardew has been given two Premier League matches to save his job with West Bromwich Albion staring the prospect of their first relegation in eight seasons.

Chelsea manager Antonio Conte has reiterated his commitment towards the Blues amid the ongoing speculation over his future.

West Bromwich Albion manager Alan Pardew has said that the club were highly unlikely to do business with Arsenal on deadline day after having given a prior notice to Jonny Evans' suitors.

Liverpool striker Daniel Sturridge is reportedly set to complete a short-term loan move to West Bromwich Albion. The 28-year-old has opted for a new challenge in his career as he looks to push for a World Cup berth with England.

Arsenal are reportedly prepared to offer Mathieu Debuchy as a makeweight to sign West Bromwich Albion defender Jonny Evans this month. The Gunners have underlined the need for a new centre-back, and there are presently leading the race to sign the ex-Manchester United graduate.

West Bromwich Albion manager Alan Pardew has dismissed suggestions that the club are looking to sign Arsenal's Calum Chambers in a part-exchange deal which could see Jonny Evans move to the Emirates.

West Bromwich Albion are prepared to sell Jonny Evans to Arsenal, provided they can get their hands on Calum Chambers in a straight-exchange deal.

West Bromwich Albion manager Alan Pardew is reportedly plotting an attempt to sign Danny Ings, who is currently out of contention at Liverpool.

Sam Allardyce's attempts to recover the disastrous first half of the season at Everton will see him turn to West Bromwich Albion defender Jonny Evans during the January transfer window.

Despite still having a very strong chance of winning promotion to the Premier League this season via the play offs, Sheffield Wednesday are rumoured to have plans to replace manager Carlos Carvalhal, with Alan Pardew one of the main candidates.

Ryan Giggs may take over at Middlesbrough

Manchester United legend Ryan Giggs is on the shortlist to take over as the next permanent manager of Middlesbrough. The Premier League strugglers have been under the temporary management of Steve Agnew since the departure of Aitor Karanka, and look set to be relegated to the Championship in the coming weeks.