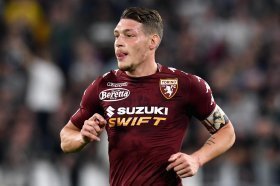 Arsenal have been handed a boost in signing Torino striker Andrea Belotti at the end of the campaign.

Arsenal are reportedly interested in landing the signature of Torino striker Andrea Belotti this summer.

Manchester United and Liverpool could reportedly go head-to-head to land the signature of Torino striker Andrea Belotti this summer.

Chelsea have reportedly identified Romelu Lukaku as one of their top targets for the summer transfer window.

Manchester United to compete with Chelsea for Italian striker?

Chelsea have received a transfer boost with Torino prepared to part ways with Andrea Belotti for €25m this summer.

Chelsea could focus on signing Torino captain Andrea Belotti, if they are unable to convinced Erling Haaland to join them this summer.

Manchester United are reportedly keeping tabs on the situation of Andrea Belotti ahead of a potential move for his services.

Manchester United have reportedly been offered the chance to sign Andrea Belotti from Torino during the next transfer window.

Everton have reportedly failed with an opening bid worth £39.5m to land the signature of Andrea Belotti during the summer transfer window.

Everton are prepared to pay a club-record fee to land the signature of Andrea Belotti from Torino during the summer.

AS Monaco are planning a surprise move to sign Leicester City's Islam Slimani this summer. The Algeria international has been identified as a potential replacement for outbound teenager Kylian Mbappe.

Premier League holders Chelsea have failed with a £63m approach to sign Torino striker Andrea Belotti this summer. Blues boss Antonio Conte is on the hunt for a new marksman despite recruiting Alvaro Morata from Real Madrid in a club-record deal.