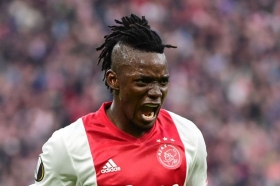 Hearts star Alex Cochrane brands Bertrand Traore 'up there' with best he's faced ahead of Euro clash
... straight to your inbox “He has quality and has played in the English Premier League so hopefully I can keep him quiet on Thursday. I will ...
01/11 10:58

Arsenal are preparing a summer transfer move for Burkina Faso international striker Lassina Traore, currently playing for Ukrainian club Shakhtar Donetsk. With the ongoing war in the Ukraine, the 21-year-old forward is ready to leave his club for a new opportunity and the Gunners are said to be prepared to pay close to £15 million to sign the forward, who is currently out of action through injury.

Aston Villa are reportedly interested in a loan deal for Ross Barkley ahead of the transfer deadline next week.

Everton have reportedly earmarked Lyon forward Bertrand Traore as their top target to reinforce the squad during the summer transfer window.

Lyon president Jean-Michel Aulas has dismissed suggestions that the club could move for the services of Arsenal striker Olivier Giroud this summer.

Bertrand Traore has revealed his delight after having sealed his move to Lyon from Chelsea on a five-year deal. The 21-year-old joined the French club on a permanent basis on Monday night after they settled an £8.8m fee with the Premier League holders.

Chelsea will reportedly part ways with Bertrand Traore this summer after they agreed on a &pound16.6m sum for his sale to French club Lyon.

Lyon president Jean-Michel Aulas has confirmed that his side are in advanced negotiations to sign Chelsea forward Bertrand Traore this summer.

Newcastle United have opened up discussions with Chelsea over the potential loan signing of Tammy Abraham during the summer transfer window.