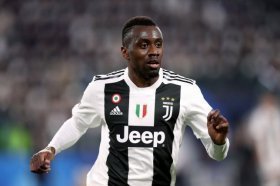 Inter Miami in chaos as Neville plots mass clear out with Shawcross, Higuain and Matuidi to be axed from Beckham’s side
Cup winner Blaise Matuidi , 34, last summer that led to their transfer allocation slashed. That left Neville and sporting director Chris
21/10 15:10

Manchester United could reportedly compete with Premier League rivals Arsenal in the race to sign Blaise Matuidi from Paris Saint-Germain this summer.

Manchester United have reportedly contacted Juventus regarding the availability of midfielder Blaise Matuidi during the current transfer window.

Juventus are planning to offer Paulo Dybala in a player-plus-cash deal to secure the signature of midfielder Paul Pogba from Manchester United.

Double swoop on the cards for Juventus

Serie A giants Juventus are said to be eyeing what would be an incredible coup, with Real Madrid star full-back Marcelo and Manchester United's presumably wantaway midfielder Paul Pogba cited as the club's top transfer targets by Italian outlet Tuttosport.

Matuidi: Signing Ronaldo will be great, but I am focused on the World Cup

France and Juventus midfielder, Blaise Matuidi has said that it would be great for the Old Lady if they can sign Real Madrid ace, Cristiano Ronaldo.

Manchester United are reportedly looking into a deal for Paul Pogba's compatriot Blaise Matuidi as they seek to reinforce their midfield ranks during the summer.