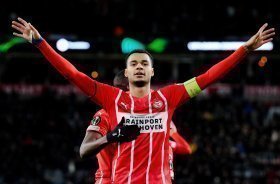 Liverpool predicted lineup vs Brighton - FA Cup
Brazilian border. LW: Cody Gakpo - Two weeks ago, Gakpo made his Premier League debut against Brighton only to be part of a humiliating 3-0 ...
28/01 17:13

Liverpool could let midfielder Alex Oxlade-Chamberlain leave Anfield this month, as the former England international is said to be keen on a move elsewhere. Manager Jurgen Klopp has deployed Oxlade-Chamberlain several times this year as replacement attacker due to injuries but the former Arsenal man has failed to impress and could now move to Brighton and Hove Albion before the transfer window slams shut.

PSV Eindhoven have completed a major coup in the January transfer window, signing Wolves' striker Fabio Silva on loan until the end of the season. The Portuguese youth international has struggled since his arrival at Molineux, only scoring four goals in 54 Premier League games since arriving from Porto; Fabio Silva will be hoping to kickstart his career in the Eredivisie.

Chelsea have failed with an opening approach to sign PSV Eindhoven winger Noni Madueke, according to Eindhovens Dagblad.

Chelsea are reportedly interested in bolstering their attack with the purchase of Noni Madueke from PSV Eindhoven.

Liverpool could battle it out with Manchester United to sign Eintracht Frankfurt striker Kolo Muani in the summer.

Liverpool are planning a concrete move to sign Manchester United target Jhon Duran in January, according to Raffaele Amato.

Liverpool have confirmed the transfer of Manchester United target Cody Gakpo on a long-term deal.

Manchester United manager Erik ten Hag has been left disappointed after the club failed to compete with Liverpool for Cody Gakpo.

Chelsea are in pole position to sign Portugal international star Joao Felix on loan from Atletico Madrid in the January transfer window. It is understood the Blues have agreed a fee of close to 15 million euros for the duration of the six month loan, with an option to extend the deal for a further year should the winger impress during his time at Stamford Bridge.