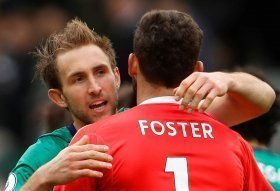 Wolves 2-0 Liverpool LIVE: Joel Matip's own goal and a Craig Dawson strike have Jurgen Klopp's Reds in a Molineux nightmare after back-to-back defeats, plus updates from all the 3pm matches

'He is a real character': Mikel Arteta heaps praise on Arsenal attacker after West Ham draw

Manchester United attacker Jesse Lingard is reportedly open to joining West Ham United on loan for the rest of the campaign.

West Ham United have finally landed a new centre-back with Craig Dawson joining them on a season-long loan from Watford.

West Bromwich Albion defender Craig Dawson has been linked with a £2 million transfer to Burnley. The newly promoted Premier League side is desperate to make a move away from Albion.