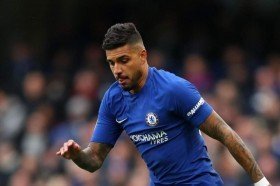 Inter Milan have reportedly opened talks with Chelsea to land the signature of defender Emerson Palmieri.

Chelsea are reportedly planning to part ways with five first-team players during this summer's transfer window.

Chelsea have reportedly been handed a boost in their pursuit of Porto defender Alex Telles.

Chelsea will reportedly have to come up with a bid of around £34.5m in order to land the services of Alex Telles from Porto this summer.

Inter Milan to swoop for Marcos Alonso or Emerson?

Inter Milan manager Antonio Conte is reportedly keen on signing one of Marcos Alonso or Emerson Palmieri from Chelsea when the transfer window reopens.

The agent of Chelsea defender Emerson Palmieri has confirmed that Juventus have joined Inter Milan in the race to sign his client during the summer transfer window.

Juventus have reportedly identified Chelsea defender Emerson Palmieri as a possible option to bolster their defence during the summer transfer window.

Chelsea ready to listen to offers for Spanish defender

Chelsea are reportedly prepared to accept loan offers for Marcos Alonso, who has struggled to cement his spot on the left side of the club's defence.

Chelsea manager Frank Lampard is going to be one of the busier Premier League managers in the January transfer window, as his club make up for one year of a full transfer ban with several transfer moves over the next three weeks. There are rumours that at least six players are departing Stamford Bridge, with as many as four new faces coming in.

Juventus boss Maurizio Sarri is reportedly keen on a reunion with Chelsea defender Emerson Palmieri when the transfer window reopens at the turn of the year.

Emerson Palmieri is reportedly close to penning a new long-term deal with Chelsea following his impressive beginning to the season under manager Frank Lampard.

Chelsea are reportedly planning to reward defender Emerson Palmieri with a new and improved deal following his impressive start to the curren campaign.

Chelsea could reportedly sanction the permanent sales of Tiemoue Bakayoko and Emerson Palmieri to AC Milan during this summer's transfer window.

Juventus are reportedly planning an attempt to lure Emerson Palmieri from Chelsea as they seek to bolster their squad for the second half of the season.

Chelsea will seek to continue their unbeaten start to the campaign when they make the trip to Anfield to face Liverpool in tonight's League Cup third round tie.

AS Roma striker Edin Dzeko has confirmed that Chelsea were interested in his services during the winter transfer window but he was not ready to secure a Premier League return.

Chelsea make the trip to Lancashire to face Burnley in Thursday's Premier League game. The Blues have the opportunity to close the gap to fourth-placed Tottenham Hotspur to just five points and Antonio Conte is likely to name his strongest team possible irrespective of the FA Cup semi-final on Sunday.

Manchester United are reportedly looking into a deal for Southampton 's Ryan Bertrand as they seek to bolster the left-back position ahead of next season.