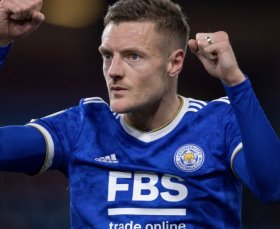 Jamie Vardy is the ONLY player left at Leicester from their 5000-1 miracle Premier League title-winning team in 2016... with Christian Fuchs retiring an MLS cult hero and Danny Drinkwater's career in freefall, here's where the stars are TODAY

Leicester City are tracking Argentina international forward Nico Gonzalez in a £40 million deal from Serie A giants Fiorentina. Gonzalez did not make the cut for Argentina's World Cup winning squad having sustained an injury three days prior to the tournament, but is still considered a very important member of the country's international setup.

Jamie Vardy will next week agree terms on a new contract with Leicester City, in a deal likely to keep the former England international with the Foxes well beyond his 37th birthday. Vardy has been a club legend since his arrival in 2012, helping the club to a Premier League title.

Manchester United have been handed a big boost with Jamie Vardy ruled out for the weekend's Premier League meeting.

Leicester City have beaten the likes of Chelsea and Liverpool in the race to sign Patson Daka this summer.

Leicester City could compete with Liverpool and Chelsea for the signature of Red Bull Salzburg striker Patson Daka.

Leicester City have emerged as fresh contenders to land the signature of Tammy Abraham from Chelsea this summer.

Leicester City are reportedly on the cusp of signing Odsonne Edouard from Celtic.