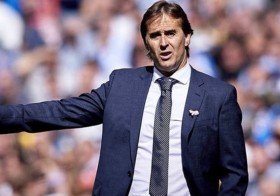 Real Madrid manager Zinedine Zidane has reportedly warned Thibaut Courtois regarding his poor form with Keylor Navas waiting in the wings to capitalise.

Real Madrid have reportedly decided to make an opening bid worth £70m to convince Chelsea into the sale of Belgian playmaker Eden Hazard.

Zinedine Zidane has reportedly set his sights of luring Chelsea midfielder N'Golo Kante to Real Madrid when the transfer window reopens at the end of the season.

Sergio Ramos could reportedly seek a fresh challenge away from Real Madrid, should ex-Manchester United boss Jose Mourinho return to the club's dugout at the end of the season.

Manchester City are unlikely to make an approach to sign Isco from Real Madrid when the transfer window reopens at the turn of the year.

Tottenham Hotspur and Chelsea have reportedly joined the race to pursue midfielder Isco from Real Madrid when the transfer window reopens.

Former Chelsea boss Antonio Conte has reportedly ruled himself out of the Real Madrid vacancy as he does not plan to return to coaching until next summer.

Chelsea to reward Eden Hazard with the captaincy?

Chelsea could reportedly reward Eden Hazard with the captaincy next season in a desperate attempt to extend his contract beyond the summer of 2020.

Former Chelsea boss Antonio Conte is said to fancy the prospect of replacing Jose Mourinho at Manchester United rather than taking up the vacancy in the dugout at Real Madrid.

Former Arsenal manager Arsene Wenger has dismissed the possibility of him taking charge of Real Madrid, who are currently on the look out for a new head coach.

Real Madrid have reportedly reached a roadblock in the negotiations involving former Chelsea boss Antonio Conte for their managerial vacancy.

Mauricio Pochettino could be set to take over the vacant Real Madrid job after Julen Lopetegui's sensational sacking. Lopetegui has seen Real embark on their worst run of early season form since 2001 and paid a heavy price for his dismal start as the club's manager.

Real Madrid have fired Julen Lopetegui after 139 days in charge of the club. The former Spain national team coach, who controversially took the Real job whilst still managing his country, has paid a heavy price for a dismal run of form since taking over in Madrid.

Real Madrid are reportedly prepared to make a winter approach to sign Colombian midfielder Wilmar Barrios, who is currently in the ranks of Boca Juniors.

Bale made the scapegoat for Real's El Clasico disaster

Real Madrid boss Julen Lopetegui is likely to pay for the team's poor start to the season, but Spanish media have also heavily criticised the players - and Gareth Bale in particular.

Real Madrid are reportedly said to have an agreement in place with former Chelsea boss Antonio Conte amid the uncertainty surrounding the future of current manager Julen Lopetegui.