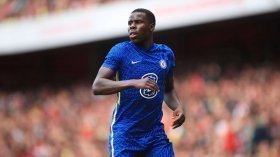 Tom Clark reveals early West Ham team news ahead of Man U clash, fans will be buzzing - opinion
in which the West Ham correspondent revealed that both Kurt Zouma and Tomas Soucek are back in contention for the trip to Manchester United
19/01 17:35

West Ham United are ready to open contract negotiations with Jarrod Bowen amid the reported interest from Liverpool.

Liverpool defender Nathaniel Phillips has been earmarked as a potential winter target for West Ham United.

Premier League duo West Ham United and Everton were in the mix to sign David Luiz following his release from Arsenal earlier this summer.

Chelsea to return for €80m-rated star in January

Chelsea could revive their interest in signing Jules Kounde when the transfer window reopens in January.

Sevilla are unlikely to sanction the sale of Jules Kounde to Chelsea unless his €80m release clause is triggered.

Chelsea yet to agree deal for La Liga defender

Chelsea are yet to make the breakthrough in negotiations to sign Sevilla defender Jules Kounde.

French defender Kurt Zouma has completed his move to West Ham United from Chelsea on a four-year contract.

West Ham United will reassess the medical results of Kurt Zouma before his potential move from Chelsea.

Chelsea are close to finalising the transfer of Jules Kounde from Sevilla.

Chelsea defender Kurt Zouma is undergoing his medical ahead of his move to West Ham United this month.

West Ham United are set to land the signature of Kurt Zouma after agreeing personal terms with the Chelsea defender.