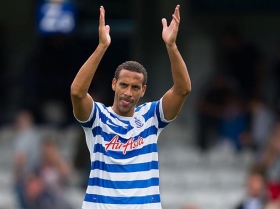 Ex-Rangers ace Jason Cummings reveals drunken karaoke night with Alan Shearer and Rio Ferdinand convinced him to sign new Hibs deal
It cost me a fortune and almost cost me my career. “I was on a free transfer and nobody wanted me. It took Shrewsbury to come in...
08/04 09:00

Manchester United legend Rio Ferdinand has said that Anthony Martial must fight for his future at the club and can't afford to drop his performances levels in the coming years.

Manchester United legend Rio Ferdinand has heaped praise on midfielder Bruno Fernandes, who has made an impressive start to his career with the Red Devils.

Manchester United legend Rio Ferdinand has said that he does not expect Ole Gunnar Solskjaer to be sacked from the head coach role, given the club should have anticipated an unpredictable season.

Real Madrid are reportedly set to target the signing of Harry Kane from Tottenham Hotspur when the current campaign comes to a close.

Manchester United legend Rio Ferdinand has said that Alexis Sanchez's career with the Red Devils could be finished following the latest injury setback against Southampton.

Ferdinand: I did not see United make three successive passes against West Ham

Ferdinand urges Rashford to fight for his place

Manchester United legend Rio Ferdinand has urged Marcus Rashford to fight for his place in the club's attack.

Manchester United legend Rio Ferdinand does not expect Jose Mourinho's men to do well in the UEFA Champions League this season.

AC Milan CEO, Marco Fassone has said that defender Leonardo Bonucci will not be leaving the San Siro, and will stay at the club for a long time, Mirror Football reports.

Former England international, Rio Ferdinand has praised Marouane Fellaini after his performance in Belgium's 3-2 win over Japan in the second round of the ongoing World Cup in Russia.

Former England international, Rio Ferdinand has praised Marouane Fellaini after his performance in Belgium's 3-2 win over Japan in the second round of the ongoing World Cup in Russia.

Former Manchester United defender, Rio Ferdinand has reacted to Spain's defeat to Russia in the second round of the ongoing FIFA World Cup in Russia, urging them to change their style of possession football.

Manchester United to go for Serie A defender?

Manchester United are considering a move for AC Milan central defender Leonardo Bonucci, according to Yahoo.

Pundit Rio Ferdinand has praised Virgil van Dijk for bringing out the best in Liverpool full-back Andy Robertson. The Anfield club signed Robertson in a £8 million deal last summer and has since impressed since playing at the left-back position for the Reds.

Liverpool agree to sign Virgil van Dijk for £75 million: Is he Worth it?

The record £75 million transfer fee has most definitely come as a surprise to most people, and Virgil van Dijk’s heavy price tag will surely give him a huge weight to carry in the coming months. Nevertheless the question remains as to whether the former Celtic defender is worth this huge sum of money, and whether the Dutchman will be able to deliver the goods for his new club. Only time will tell however..

Manchester United have reportedly rewarded midfielder Michael Carrick with a year's extension following his impressive showing during the 2016/17 season.