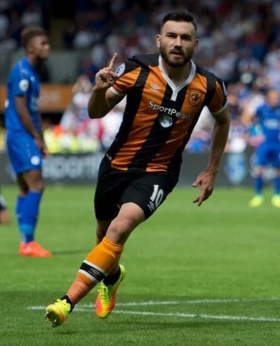 Virals: Happy Birthday to West Ham favourite Robert Snodgrass
has accumulated £20.8million worth of transfer expenditure. Always a popular figure amongst the West Ham faithful, no doubt many Hammers
07/09 12:28

West Ham are to allow winger Robert Snodgrass depart the club to join Premier League strugglers West Bromwich Albion. The attacking midfielder has been deemed surplus to requirements at the Hammers, with the club closing on alternative targets in the January transfer window.

Aston Villa have pulled off a major coup in signing Robert Snodgrass from West Ham United on a season long loan deal. The Scottish international will play an important part of Villa's plans to return to the Premier League.

Sunderland head coach Simon Grayson has admitted that he would consider the prospect of signing West Ham United attacker Robert Snodgrass this summer.

West Ham United have told Robert Snodgrass that he is free to leave the club after being deemed surplus to requirements at the London Stadium, despite only arriving from Hull City in January.

Despite joining the club just six months ago, West Ham winger Robert Snodgrass could be on his way out of the club after finding it difficult to settle at the London Stadium. Sunderland are showing interest and believe he could be the man to fire them back to the Premier League.

Robert Snodgrass joined West Ham United in the January transfer window after impressing for struggling Hull City. However, he could now be set to leave, with newly promoted Brighton and Hove Albion showing interest.

West Ham United star Michail Antonio has become a fan favourite with the London club since his move up from the Championship. His power and pace constantly put defenders on the back foot, but the Hammers face losing him in the summer after difficulties in contract negotiations.

Hull City completed the signing of Kamil Grosicki from French side Rennes on transfer deadline day. The winger has inked a three-and-a-half year deal with the Premier League strugglers.

Hull City are planning to complete a late move for Valencia attacker Nani. The Portugal international has previously featured under Marco Silva at Sporting Lisbon during the 2014-15 season.

Robert Snodgrass has completed his move to West Ham United from Hull City for a reported fee of around &pound10.2m.

Hull City midfielder Robert Snodgrass will reportedly undergo a medical with West Ham United on Friday after he agreed to link up with the East London club.

West Ham and Burnley have offers accepted for Robert Snodgrass

West Ham United will reportedly lodge their fourth bid for the month to sign Hull City winger Robert Snodgrass. The Scotland international has been the standout performer for the Tigers, who are currently in the drop zone.

Robert Snodgrass has reportedly turned down the chance to join the Chinese Super League this month. The Scotland international has been an influential player for Hull City this season.

West Bromwich Albion have reportedly joined West Ham United in the chase to sign Hull City attacker Robert Snodgrass. The Republic of Ireland international is contracted to the Tigers until the summer of 2018.