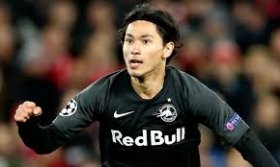 Liverpool attacker Xherdan Shaqiri will seek a fresh challenge away from the club when the transfer window reopens.

Liverpool have reportedly made contact with Lazio regarding a potential summer move for Joaquin Correa.

Sevilla are reportedly keen on landing the signatures of Xherdan Shaqiri and Takumi Minamino when the transfer window reopens.

Manchester United are set to compete with Liverpool to sign Raphinha during this summer's transfer window.

Liverpool are reportedly prepared to offer Takumi Minamino as a makeweight to sign Lucas Ocampos from Sevilla this summer.

Liverpool are reportedly monitoring the performances of Raphinha ahead of a potential summer move for his signature.

Despite having one the most dangerous attacks in the world of football, Liverpool perhaps lack depth towards the final third of the pitch. Behind Mohamed Salah, Roberto Firmino, and Sadio Mane, the Reds have reaped the rewards of strategic recruitment following the early form of Portugal’s Diogo Jota.

Liverpool are deemed to have failed with a late approach to sign Samuel Chukwueze from Villarreal during the January transfer window.

Liverpool have reportedly turned their head towards Napoli midfielder Fabian Ruiz, according to the Daily Mail.

Liverpool have joined the transfer race for Real Madrid star Isco, who also turns out to be a key target for Chelsea, according to Football London.

According to Liverpool Echo, Liverpool are keeping close tabs on Norwich City midfielder Todd Cantwell, who is also said to be on the transfer radar of Manchester City, Manchester United and Tottenham.

Liverpool to swoop for Nigerian forward?

Liverpool are understood to hold an interest in signing Nigerian forward Victor Osimhen following his impressive displays for the French outfit Lille this season.

Red Bull Salzburg striker Erling Braut Haaland has reportedly decided to snub advances from Manchester United and he seems on course to join Juventus during the winter transfer window.

Liverpool boss Jurgen Klopp is reportedly keen on landing the signature of James Rodriguez from Real Madrid during next summer's transfer window.

Liverpool have confirmed that they have reached an agreement to sign Takumi Minamino from Red Bull Salzburg at the turn of the year.

According to Metro, Liverpool are one of the several clubs tracking the progress LOSC Lille striker Victor Osimhen. The Nigerian youngster is also said to be watched by fellow Premier League clubs Chelsea and Tottenham Hotspurs.