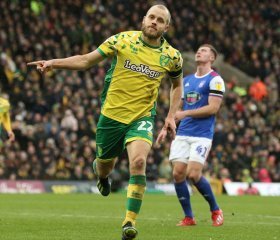 Arsenal have reportedly made contact with the representative of Norwich City attacker Emiliano Buendia.

Manchester United are reportedly eyeing a late swoop for the services of Odion Ighalo from Chinese Super League side Shanghai Shenhua.

Chelsea manager Frank Lampard has appreciated the support offered by the club's faithful after coaching the Blues for the first time at Stamford Bridge.

Parma and Ivory Coast international forward Gervinho is weighing up a return to the Premier League. The attacker, who had a previous spell playing under Arsene Wenger in England, is reportedly wanted by Premier League newcomers Norwich City for a cut price 2 million euro transfer fee.

Teemu Pukki has decided to extend his stay with newly promoted Premier League side Norwich City, signing a three year contract at Carrow Road. The striker finished as the Championship's top scorer last campaign and will have the opportunity to prove himself in the English top flight this upcoming season.