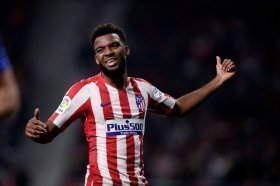 Atletico Madrid are prepared to offer Arsenal a choice of three players as they aim to sign Alexandre Lacazette in a part-exchange deal.

Manchester United are reportedly monitoring the situation of Atletico Madrid attacker Thomas Lemar ahead of the summer transfer window.

Manchester United reportedly met with the agent of Thomas Lemar, who has been fancied to leave Atletico Madrid at the end of the season.

Bayern Munich have reportedly joined Arsenal in the race to sign Thomas Lemar from Atletico Madrid prior to the winter transfer deadline.

Atletico Madrid are ready to free Cavani from his PSG nightmare

Atletico Madrid boss Diego Simeone is looking to bring in a new striker during the January transfer window and latest reports indicate that the player at the top of his list, is out of favour Paris Saint-Germain front man Edinson Cavani.

Arsenal have reportedly bowed out of the race to sign Thomas Lemar from Atletico Madrid thereby putting Tottenham Hotspur in pole position.

According to Daily Mail, PSG will demand £8.5million for Edinson Cavani should Atletico Madrid sign him in the summer.

Arsenal manager Mikel Arteta is unlikely to be backed with transfer funds for January after the club's spending spree over the summer.

Atletico Madrid have reportedly made contact with super-agent Jorge Mendes to try and broker a deal with Arsenal for French attacker Thomas Lemar.

Arsenal are reportedly looking to revive their long-term interest in signing Thomas Lemar, who has endured a difficult spell with Atletico Madrid in the Spanish La Liga.

Monaco have sacked coach Leonardo Jardim as reports suggest that Arsenal legend Thierry Henry could be set to replace him.

Chelsea striker Olivier Giroud has reportedly been identified as a possible target for Atletico Madrid before next month's transfer deadline.

Chelsea have reportedly joined the likes of Arsenal and Liverpool in the pursuit of AS Monaco winger Thomas Lemar this summer.

Liverpool manager Jurgen Klopp has reportedly decided against making a move for AS Monaco's Thomas Lemar. The France international has been on the Reds' radar since the previous summer transfer window but it now appears that they have cooled their interest.

Monaco have invited all clubs to make a move for France international winger Thomas Lemar, after slumping to a heavy 7-1 defeat to PSG in the Ligue 1 match yesterday. The 22-year-old has been heavily linked with a move to the Premier League.

Manchester City managed Pep Guardiola has reportedly added Chelsea's Eden Hazard to his list of targets ahead of the summer transfer window.