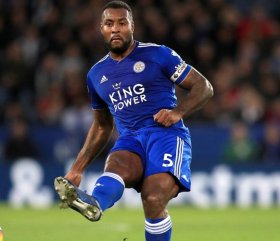 Leicester City captain Wes Morgan has signed a new contract with the Foxes until 2020. The defender, who helped lift the Premier League title for his club, played in his 700th game against Burnley last weekend. Morgan has agreed to stay on for another season under new manager Brendan Rodgers.

Leicester City will reportedly lodge a fresh attempt to sign defender Jonny Evans after their £10m approach was turned down by West Bromwich Albion.

Leicester plan to sign Harry Maguire on the cheap

Leicester City are reportedly planning a cut-price deal for Hull City's Harry Maguire, who has just 12 months left on his current contract.

Hull City defender Harry Maguire has reportedly been earmarked as a top option for Leicester City ahead of this summer's transfer window.

Leicester City do it again

Reigning Premier League champions Leicester City have made a name for themselves for doing the unexpected, and they did it again on Tuesday night, as they overcame a 2-1 first leg deficit to progress to the quarter finals of the Champions League, beating Sevilla 3-2 on aggregate.

Premier League champions Leicester City are prepared to renew their pursuit in Michael Keane despite the impending interest from Chelsea.

Leicester in for Aleksandar Dragovic?

Leicester City are set to lodge a formal bid for Dynamo Kiev defender Aleksandar Dragovic having failed in their pursuit of Burnley centre-back Michael Keane.

Algerian international Riyad Mahrez has ended all speculation by inking a fresh four-year contract at the Premier League champions. Arsenal have been strongly linked with the attacker this month.

Leicester City manager Claudio Ranieri has signed a new four year contract to keep him at the club till June 2020.

English champions Leicester City have made a formal enquiry to sign Sevilla centre-back Adil Rami this summer. The Frenchman had a good season with the Europa League champions and this has earned him a place with his national side for Euro 2016.

Of the three newly promoted teams in the English Premier League, Leicester City were by far the most impressive with a 2-2 draw at home to Everton. The Foxes showed all the battling qualities that saw them win the 2013-14 Championship by a distance over Burnley but can Nigel Pearson’s men maintain that form and avoid the drop at the end of this current campaign?