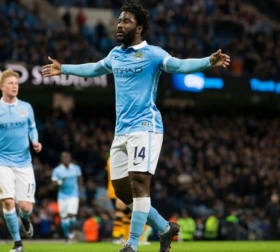 Ivory Coast international striker Wilfried Bony is set to join Brighton on a free transfer this week, with the former Man City and Swansea City star set to return to England after a spell in the Middle East. Bony is expected to sign a 12 month deal with the South Coast club.

Swansea City have completed the signing of Wilfried Bony from Manchester City for a reported fee of around £12m. The Ivory Coast international rejoins the Swans on a two-year deal with the option of an additional 12 months, should he impress.

Ivory Coast international and Man City striker Wilfried Bony has made an emotional return to Swansea City, the club where he began his career in the Premier League. Bony arrives at the Swans having had a difficult loan spell with Swansea City last season.

Swansea City are reportedly prepared to offer an escape to former striker and Manchester City outcast Wilfried Bony. The Ivory Coast international has largely struggled during his time at the Etihad, scoring just 10 times in 46 outings.

Manchester City flop Wilfried Bony is reportedly edging closer to a return to former club Swansea City. The Welsh outfit are prepared to finalise a cut-price deal for the striker, who is deemed surplus to requirements at the Etihad.

French club Marseille are prepared to lodge an attempt to sign Dutch striker Vincent Janssen from Tottenham Hotspur this summer.

It's fair to say that Wilfried Bony's career has stalled since he moved to Manchester City in 2015. An attempt to rediscover his form last season saw him move on loan to Stoke City, but he struggled to make an impact for The Potters. Now, Swansea City are keen to sign him again and Manchester City have told them just how much they will have to pay to do so.

French club Marseille are monitoring the situation of Arsenal striker Olivier Giroud with a view to a late swoop for his services this summer.