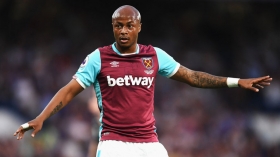 West Ham United have reportedly rebuffed an opening offer from Swansea City to pursue the services of former player Andre Ayew this month.

West Ham are interested in a deal to sign Swansea City defender Alfie Mawson in the January transfer window. The England under-21 international has impressed since forcing his way into the Swans' first team.

Arsenal boss Arsene Wenger has made 11 changes to his lineup for tonight's League Cup quarter-final versus West Ham United.

Manchester United put in a spectacular performance in the opening game of the season as they smashed West Ham 4-0 with debutant Romelu Lukaku impressing with a brace.

West Ham United are planning an attempt to sign Werder Bremen striker Max Kruse as they seek to add an injury-free striker to their ranks.

Clubs eyeing up move for Jordan

The impressive performances of Jordan Ayew in the ongoing African Cup of Nations in Gabon has gone unnoticed by various clubs across Europe. Jordan Ayew is the younger brother of West Hams star, Andre Ayew, and plays for Aston Villa in the English Championship.

West Ham United have reportedly keen on signing Sunderland's Jermain Defoe in the current transfer window. The Hammers are prepared to make a renewed bid for the veteran after their initial &pound5m offer was rebuffed.

Premier League duo Sunderland and Swansea City are keeping a close watch on Copenhagen striker Federico Santander. The Paraguay international joined the Danish champions from native side Guaraní in 2015.

West Ham United have agreed on a club-record deal to sign Simone Zaza just hours after their Europa League exit. The Italian has struggled for regular playing time at Juventus.

West Ham United are considering a loan approach for Chelsea's Loic Remy after they failed in their attempts to sign a new striker this summer. Slaven Bilic's side are in a desperation stage after Andy Carroll joined Andre Ayew, and Diafra Sakho in the physio room.

West Ham United are hopeful that a loan deal to sign Wilfried Bony can be agreed before the end of the transfer window. Bony has spent the last two campaigns with Man City but is struggling for regular first team football.

West Ham United are preparing a potential bid for Manchester City striker Wilfried Bony. The Hammers were dealt a huge blow this week after record signing Andre Ayew was ruled out for four months with a thigh injury.

Tottenham Hotspur have reportedly placed a price tag on Nacer Chadli's head amid interest from Swansea City and Borussia Dortmund. The Belgian is currently assessing his options.

West Ham United have announced the arrival of Swansea City attacker Andre Ayew for a fee of £20.5m. The Ghanaian impressed in his debut campaign in the Premier League last term.

Spain international Fernando Llorente has snubbed advances from Swansea City to remain at Sevilla next season. The Swans are actively pursuing a new striker after Batefimbi Gomis joined Marseille on a season-long loan.

West Ham have tabled an improved bid of 20 million GBP for Swansea City striker Andre Ayew. The Hammers have been chasing the Ghanaian forward for over a month but are confident their latest offer will be sufficient to wrap up a deal.

Man City in for Andre Ayew?

Manchester City are the latest side to express interest in Swansea City forward Andre Ayew. The Ghana international was impressive in his debut Premier League season last term.