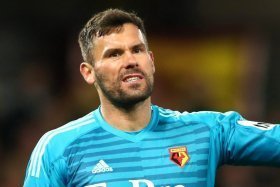 Chelsea have identified Lille goalkeeper Mike Maignan as a potential replacement for Kepa Arrizabalaga ahead of next season.

Chelsea and Everton are in the running to sign goalkeeper Ben Foster from Watford this summer, a report from The Sun claims.

Frank Lampard has one concern after Chelsea's win vs Watford

Chelsea manager Frank Lampard has said that the club have room for improvement on the defensive side of their game.

Chelsea attacker Christian Pulisic has expressed his delight after contributing the match-winning goal during the 2-1 Premier League win over Watford on Saturday.

Everton star Jordan Pickford believes Manchester United goalkeeper David de Gea is the best in the business in his position despite an average start to the season.

Watford goalkeeper Ben Foster has praised Manchester United's David de Gea after his heroic performance against his side last Saturday.

Watford goalkeeper Ben Foster has symphatised with Arsenal shot-stopper Petr Cech, who has witnessed a tough beginning under Unai Emery this season.

West Bromwich Albion have confirmed the signing of goalkeeper Sam Johnstone from Manchester United for an undisclosed fee.

Manchester United are reportedly said to be planning a surprise move for Manchester City goalkeeper Joe Hart during this summer's transfer window.