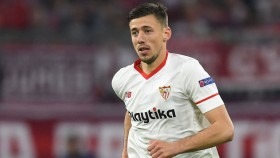 According to The Sun, Barcelona have entered the transfer race for Leipzig centre-back Dayot Upamecano, who has been closely watched by Arsenal.

Barcelona meet Serie A club for the transfer of Todibo

According to Mundo Deportivo, Barcelona are planning to sell Jean-Clair Todibo as they have held talks with AC Milan over a possible transfer move.

Manchester City have reportedly made initial contact with Barcelona regarding the availability of French defender Samuel Umtiti.

Barcelona are prepared to part ways with defender Samuel Umtiti, should Arsenal meet their £53.8m valuation for the France international.

Manchester United have reportedly opened up discussions with Barcelona to secure the services of French defender Samuel Umtiti.

Arsenal are reportedly prepared to make a move for Barcelona defender Samuel Umtiti, should they come victorious in the Europa League final against Chelsea next week.

Arsenal to beat Manchester United to the signing of World Cup winner?

Arsenal are reportedly said to hold the edge over Manchester United in the race to sign Samuel Umtiti from Barcelona at the end of the season.

Arsenal manager Unai Emery has revealed his admiration for Barcelona defender Samuel Umtiti amid suggestions that the Gunners could make a formal approach to sign him from the Catalan giants.

Barcelona defender Thomas Vermaelen could make a surprise return to the Premier League this winter with both Southampton and Watford interested in his signature.

Barcelona are reportedly considering an approach for Arsenal club-captain Laurent Koscielny when the transfer window reopens in a couple of months' time.

Tottenham Hotspur midfielder Eric Dier has reportedly emerged as a potential target for Barcelona ahead of the transfer window at the turn of the year.

Barcelona coach Ernesto Valverde could be in line for a crucial addition in January as the Catalan giants reportedly want to wrap up the signing of Matthijs de Ligt.

Why Barcelona is the Strongest Contender in 2018-19 Champions League?

The UEFA Champions League is right around the corner, and the coming season of the prestigious tournament would see many top teams including Real Madrid, Bayern Munich, and Manchester United. However, looking at the current team of Barcelona, it seems highly likely for them to win the tournament. The current Catalan team has balance imbibed in every position for the coming season and would give a tough time to any opponent.

Barcelona have reportedly set their sights on signing Adrien Rabiot from Paris Saint-Germain before the Spanish transfer window closes on August 31.