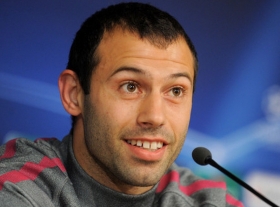 Chelsea defender David Luiz has reportedly made himself available for a move to Barcelona during a recent trip to Catalonia for medical reasons.

Manchester United defender Daley Blind has emerged as a potential target for Barcelona ahead of the winter transfer window. The Dutchman has played second fiddle to Ashley Young during the course of the current campaign.

Liverpool have reportedly approached Barcelona midfielder Javier Mascherano, who is considering a potential move away from Camp Nou.

Barcelona sporting director Robert Fernandez has insisted that Belgium defender Thomas Vermaelen could contribute for the club during the ongoing campaign.

Former Real Madrid and Manchester United winger, Angel Di Maria, has become a shock target for Barcelona, as the Catalan giants continue to search for the best way to reinvest the world record transfer fee that they received.

Belgium international Thomas Vermaelen could stay put at Barcelona for the season with manager Ernesto Valverde prepared to offer him a backup role in the central defensive department.

Neymar's move to PSG looked to have taken a step closer after he walked out of Barcelona's training session following a bust up with new boy Nelson Semedo and also cancelled an event with Chinese travel agent firm Ctrip, citing "transfer business".

French defender Jeremy Mathieu has been told to find a fresh club this summer as he does not feature in the plans of Barcelona boss Ernesto Valverde.

Barcelona have reportedly identified Tottenham's Christian Eriksen as the ideal player to snatch the La Liga title away from Real Madrid next season.

The veteran Spanish midfielder is believed to have fallen out of favour with new Barcelona manager Ernesto Valverde and is seeking a move away from the club with Juventus emerging as the favourites to land him.

New Barcelona manager Ernesto Valverde wants to implement changes to the Catalan club quickly and has already decided which players he wants to sell in the summer.

Argentina international Javier Mascherano will reportedly snub advances from his suitors in order to remain at Barcelona next season.

Barcelona are reportedly planning to beat both Chelsea and Manchester City to the signature of Juventus centre-back Leonardo Bonucci this summer.

Javier Mascherano has no thoughts of joining the Chinese Super League despite dropping down the pecking order at Barcelona.

Juventus are considering an approach for Belgian international Axel Witsel with a deal for Javier Mascherano looking less likely. The Old Lady are on the search for further midfield recruits after signing Miralem Pjanic.

Reported Tottenham Hotspur and Liverpool target Marc Bartra has completed his move to Borussia Dortmund on a long-term contract. The Spain international has accepted the deal following his lack of playing time at Barcelona last season.

Daley Blind has emerged as the latest target in Barcelona's search for a new centre-back as it seems he will not be wanted by new United boss Jose Mourinho.