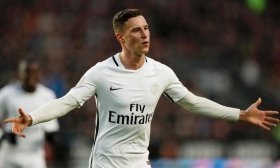 Julian Draxler to join Benfica on loan from PSG

German international Julian Draxler hopes to kickstart his struggling career at Benfica, as the 28-year-old today agrees a loan deal to join the Portuguese side. Since his arrival at PSG in 2017, Draxler has played 131 times for the club, but has failed to represent the team week in week out since the 2018-19 season.

Arsenal will reportedly need to pay around £35m to sign Christopher Nkunku from RB Leipzig during the summer transfer window.

Arsenal to be offered Julian Draxler in a part-exchange deal

Paris Saint-Germain are prepared to offer Julian Draxler in a part-exchange deal to sign Matteo Guendouzi this summer.

Chelsea have reportedly added Idrissa Gueye and Julian Draxler to their transfer shortlist ahead of the January transfer window.

In a recent interview, former Liverpool defender Jamie Carragher suggested that Liverpool might need to go into the transfer market in January to sign an attacking midfielder to help ease the burden on the club’s front three.