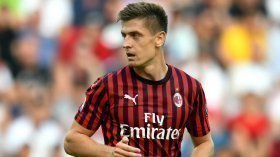 Chelsea have reportedly been offered with the opportunity to land AC Milan striker Krzysztof Piatek on loan during the ongoing transfer window.

Barcelona have reportedly shrugged off the transfer pursuit of AC Milan striker Krzysztof Piatek, according to Sport.

According to the Italian outlet SempreMilan, Sevilla are negotiating with AC Milan over the transfer of Spanish winger Suso.

Manchester United are understood to have made the breakthrough in their transfer pursuit of Sporting Lisbon midfielder Bruno Fernandes.

Manchester United in the race for Serie A striker

Manchester United have reportedly turned their attention towards AC Milan striker Krzysztof Piatek, who has also been closely watched by Tottenham Hotspur, claims the Daily Mail.

Harry Kane's latest injury problems could prove to be an invaluable lifeline for one of Europe's out of form front men. Reports both in England and Italy claim that Tottenham Hotspur are interested in bringing Polish marksman Krzysztof Piatek to the Premier League, to provide cover for the England captain who will be sidelined until April with a hamstring injury.

Tottenham in the pursuit of £30m-rated Serie A striker

AC Milan will reportedly compete with Manchester United in the race to sign Juventus outcast Mario Mandzukic in the New Year.

Zlatan Ibrahimovic appears set to turn down advances from former club Manchester United in order to rejoin AC Milan in the Serie A.

Chelsea are reportedly weighing up a winter approach to sign Krzysztof Piatek from the ranks of AC Milan.

Could Luis Suarez be on his way out of Barcelona?

Luis Suarez is 33 and Barcelona are finding his replacement. Suarez is still capable of offering a high level of football in Europe. If Barcelona decide to cash in on Suarez, he could generate a reasonable fee.

Chelsea striker Alvaro Morata has reportedly finalised his transfer to Atletico Madrid and an official announcement is expected to be made later in the day.

Manchester City have deployed a scout to monitor the progress of Genoa striker Krzysztof Piatek. The forward is wanted as a backup to Sergio Aguero, and could move to the Premier League in a reported 35 million euro transfer.