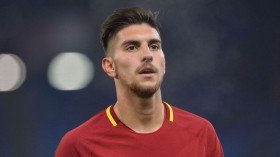 Roma open contract negotiations with Lorenzo Pellegrini amid Tottenham interest
quest to add quality to the Spurs midfield. Houssem Aouar is another player on Tottenham's radar this summer, with the one-cap France
23/07 18:01

Liverpool have been tipped to land the signature of AS Roma captain Lorenzo Pellegrini during the summer transfer window.

Manchester United have reportedly opened negotiations with the representative of Lorenzo Pellegrini as they seek to lure the midfielder from Roma in January.

Manchester United are reportedly planning a winter attempt to sign Lorenzo Pellegrini after failing to pursue the Roma midfielder in the previous transfer window.

Arsenal have reportedly enquired over a possible move for Sampdoria midfielder Dennis Praet.

Arsenal are reportedly considering a move for AS Roma midfielder Lorenzo Pellegrini. The 21-year-old only returned to the Giallorossi from Sassuolo last summer and made 37 appearances during the 2017/18 season.

Roma have completed the signing of French midfielder Maxime Gonalons from Lyon on a four-year contract.

Pellegrini returning to AS Roma

Lorenzo Pellegrini stated in an interview after Italy's 3-1 defeat to Spain in the U21 euros that he will return to Roma next season to take the next step in his ambitious career.